There are a lot of nerdy things I’ll cop to. Being totally fascinated with Canadian airplanes and pilots in WWII is one. Being competitive about StarCraft and feeling like I should be training for it like it’s a half-marathon and not a meaningless video game is another. But one of the things I’m not as ready to admit to–and I have to, to tell this tale–is that I kind of love fish.

Not all fish, mind you. Specifically, bettas. Specifically specifically cool-coloured male bettas, the fighting fish you hear about. They’ve got attitude, and.. well.. they’re kinda pretty. They’re like biological decoration, all shimmery-like and blowing bubbles and if the house is quiet for extended periods of time it’s something to talk at so you don’t go out of your head with boredom. I mean, you’re talking to a fish, so it’s still kind of crazy-looking, but the fish doesn’t judge you. I don’t think.

The other night, a little after midnight. I was getting home from an all-around awesome evening out. I parked my car, the ever-failing RustMobile, really poorly, because my body was basically frozen to the gas pedal and the wheel was frozen into place. The heater makes terrible noises and it’s more of a hassle to suffer mild hypothermia than it is to subject my brain to the Mobile’s banshee shrieks of pain. It was cold. Ottawa decided that winter wasn’t over for a couple of days and wanted to take it out on me.

I warm up pretty quickly. I’m powered by a small-scale thermonuclear reactor. Fact.

So as I’m warming up and pouring some water into myself, I take a peek at my current betta, the Captain. The Captain’s tank was moved next to the kitchen window when the weather first got warm so he could catch more sun, and the warmth had really perked him up. I hadn’t thought much about him other to feed him over the last couple of days, and as I got my glass I realized (in spite of my nuclear-powered self-heating) just how cold and drafty it was near the window.

Son of a bitch.

My last betta died after moving to and from Kingston with me a few times, but the Captain is only a month old and is a tenacious, angry little fish. What a bummer. I’m not usually much to worry when a betta dies; they’re fairly delicate creatures and all. Still. Something about this tweaked me the wrong way. Maybe it’s all the gloopiness I’ve been feeling in my placement, but when I felt how cold the water in the tank was, my heart went out to the little guy. Bettas ideally live in water in the mid-70s (Farenheit); it was barely 65 (about 18 degrees C)  in the house and the tank was far colder than that. It was like three degrees away from being a block of ice.  I scooped him up in my glass and went to the bathroom, ready to commit him to a watery, porcelain grave.

It was almost imperceptible. Just the smallest of movements.

Then nothing. I stared for a minute, waiting for something else, moving the glass a little, hoping the currents would inspire another little movement.

Still nothing. But the first movement from the Captain was enough. I started running warm water in the sink and slowly replaced the cold, dead water in the glass with hot water.

I almost cheered. The Captain’s first action when I moved him into his tank was to try and fight me and he was fighting again. I swirled the glass a little to get him moving, and…

…pissed at being shaken like a bouillabaisse-flavoured martini, he tried to fight me again. This time I did cheer a little, quiet-like, because the house was sleeping. The cheer was short-lived, though. 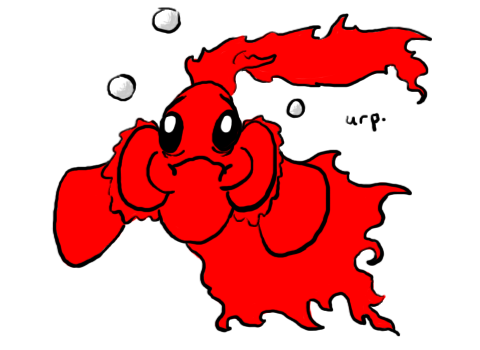 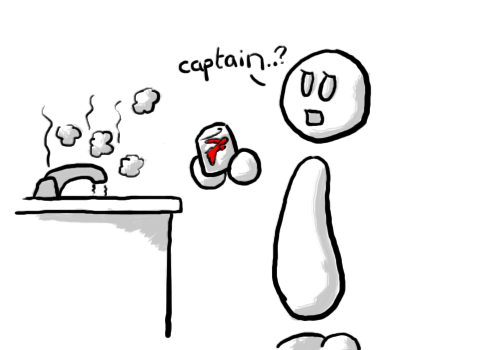 I couldn’t believe it. We were so close.

I wasn’t about to give up after that threat display from the Captain. I ran more warm water and rotated the glass again, trying to encourage more motion. As he kept warming up, he started to right himself. The water was moving and he was slowly moving his fins, trying to right himself, but he was still buoyant, and every time the Captain made it back underwater, he’d float belly-up again. The more he warmed up, the more he struggled. The more he struggled, the more tired he got. The more tired he got, the more he floated. Maybe I was projecting onto him, but I was almost starting to see defeat in his little fishy eyes. I know I was feeling defeated. It was looking like the Captain was going to take a flush, like other bettas before him.

But unlike the other fish, who I disposed of after they were dead, I was suddenly hit by the realization that I was going to watch the Captain die.

The Captain made a last bid to stay submerged, and, exhausted, failed to do so. Totally belly-up, and unable to right himself. His fins moved slowly and ineffectually, eyes staring blankly out of the glass. I held the glass at eye level and locked eyes with him.

Then, a funny thing happened. But not with the fish. He stayed totally still. This thing, it happened with me.

There have been a couple of deaths in my family in the last few years. First, my grandfather, who was as vivacious and cheeky the last time I saw him as the first. He died so suddenly that I hadn’t even had time to respond to his last email (it was a chain-letter joke; I can’t remember the punchline, but I think it was something about Australians and koala shit, and I laughed my ass off and never got to tell him). I still haven’t entirely come to terms with that loss; I still don’t understand it, frankly. More recently, the single most alive person I’ve ever known, my aunt, made entirely of world travel, arts and culture, marathons in Athens, good food, and good will, was lost to cancer.

Even the damn RustMobile, the old Pontiac I learned to drive in, was falling apart.

All of this–grandpa, my aunt, even the goddamn car–kind of hit me as I was looking at the Captain’s limp little body floating at the top of the glass. And, in an uncharacteristic display of sap, I spoke to him: 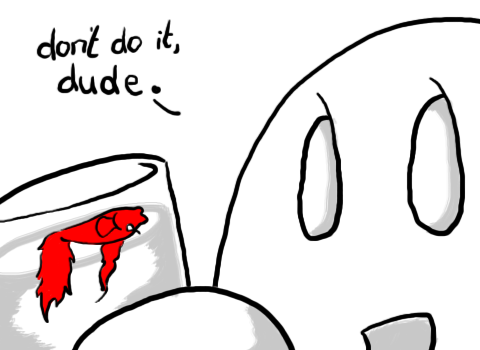 Okay, maybe it wasn’t actually that sappy a sentiment, now that I look back. But there I was, talking to a fish, looking crazy, well after one in the morning on a work night. I’d been trying to coax him back to the land of the living for nearly an hour, for no really logical reason.

And then I smiled. There was a little look–probably in my own head, a product of wine and now sleep-deprivation–playing over the Captain’s face.

I could swear to God he was judging me for talking to a fish. How nuts do you have to be to talk to a fish? Especially a dead fish.

I swirled the water gently in the glass.

The Captain fought. I just kept the water warm; I filled another glass with really hot water and brought it into my bedroom, periodically topping up the Captain’s water from the hot glass to keep it warm and fresh. I put him on my bedside table and gave him a nibble of food. He ate slowly, doing lazy laps of the glass every couple of bites as though testing his legs. Fins. Every so often, he rolled over and struggled to right himself, so I put my hand into the glass and gently nudged him right-side up.

It was like watching somebody recovering from transplant surgery, but without knowing whether or not the transplant has taken. It was all very Schroedinger.

Finally I made the call that I’d done everything I could reasonably do for a tiny fish. I climbed into bed, and just before I shut off the light, I looked over at the Captain. He was listing a little, but his fins were paddling away and he seemed, for the moment at least, stable. I tapped the glass. 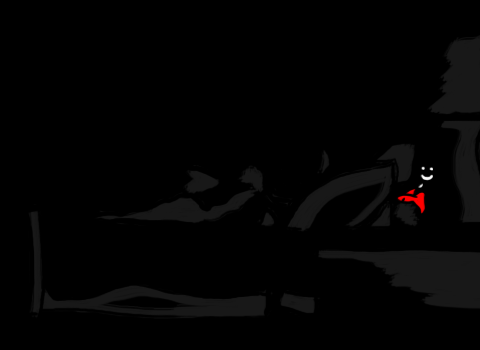 The Captain’s back in his tank now, enjoying being able to stretch his fins and dart around again. He’s in a warmer spot in the house, near a heating vent, by a window, so he gets the best of both warmth and light. Finally, in one night, spending hours staying up far too late to minister to a fish that cost me all of $3.99, I finally exercised some of my demons about having to say goodbye to people before I was ready to let go of them. And now, a pet whose only previous purpose had been to be decorative and to act as a sounding board when the house is empty, now holds a surprisingly special place in my life.

I still look crazy talking to a two-inch-long fish. But now I don’t care as much.

3 Thoughts to “Vigil for a Fish”